The NAVITEL R66 2K DVR is the first of the new device's line of NAVITEL devices — miniature screenless dashcams with high image quality and wide functionality. 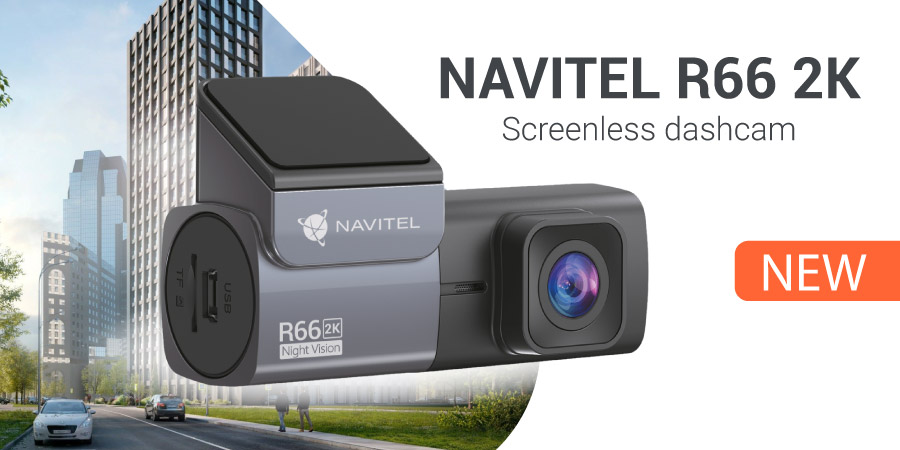 NAVITEL R66 2K is a super compact dashcam with a 360° rotating camera that allows you to capture both the situation on the road and inside the car.

The small size of the case and the absence of a display allow you to set up the dashcam in any place convenient for you, for example, behind a rearview mirror, and make it almost invisible from the outside. The device is mount to the windshield using a small plastic pad with 3M adhesive tape, which securely holds the device while driving, even on uneven roads.

Powered by an MSTAR SSC337 processor and a Galaxy Core GC4653 sensor, the device captures 2K (2560×1440p) video with an excellent color reproduction, clarity, and contrast. A six-layer glass lens with a viewing angle of 123° captures the situation not only in front of the car's hood, but also across the entire width of the roadway.

The built-in Wi-Fi provides synchronization with a smartphone through a special NAVITEL DVR Center mobile application (available in the App Store, Google Play and AppGallery). On the screen of your smartphone or tablet, you cannot configure your dashcam, but also view the recorded photo and video files or broadcast video from the recorder in real time, as well as safe files to your smartphone and share them on social networks or by e-mail.

The device supports microSD cards up to 128 GB. Video recording is carried out in a cyclic mode — when the memory card of the DVR is full, new videos will automatically be recorded over the oldest ones. The built-in gravity sensor (G-sensor) protects against overwriting video taken in abnormal situations, for example, in the event of a sudden maneuver or hitting a car, automatically locking the footage in the “event file” to prevent this video from being overwritten.

* Gift voucher for an annual license of Navitel Navigator for smartphones and tablets on Android OS with maps of 43 European countries, as well as Russia, Belarus, Kazakhstan, and Ukraine.